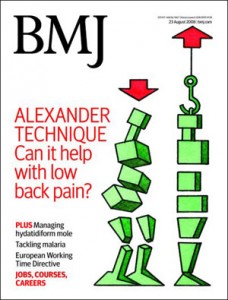 The British Medical Journal (BMJ) conducted a landmark research study to examine back pain modality options. Conclusion: the Alexander Technique proved the most effective option, reducing chronic back pain by 86%.   Further research at the University of the West of England examined Pain Clinic Patients, and more than half of those studied had reduced or stopped taking pain medication after six lessons in the Alexander Technique.

According to a study recently published in the Annals of Internal Medicine, Alexander Technique is beneficial for people suffering with chronic neck pain. For more information see NPR’s report on the study here.

World-class Olympians, fitness leaders, and professional athletes including tennis legend John McEnroe have become devotees — after being injured, PGA golfer Jeff Julian claims the Alexander Technique “gave himself back his career.” (Sports Illustrated, The Alexander Technique, The Answer to a Stress Test).